As we know, GATE results have been declared, and most of the students are looking for M.Tech admission. If some student is getting a good enough rank to get into top 7 IITs or IISc, it’s a fairly straightforward situation for that candidate. But many students don’t have a high rank to fetch admission into some of the old IITs directly. According to the various college predictors, either they are getting already established NITs, or they are getting some of the new IITs or some other college. In this article, we will try to discuss if you are only concerned about placements. In which college you should go if you are not getting old IITs/IISc. We will try to provide the ranking according to the placements. Here we will consider that the candidate who is looking for admission does not care about the brand value, research culture, infrastructure, faculty profile, fee, etc. 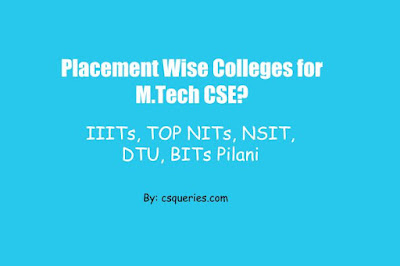 In this list, IIITH wins by a considerable margin. It has placements almost equal to or at par to IITB or IITD etc. If you are getting IIITH, don’t think at all, go and take admission.

Except for IIT Hyderabad, almost all the new IITs are struggling to call the top tech giants in their campus placements. I will highly suggest you to go to the new IIT, where the CSE branch has started very early. There are some of the IITs where the cse branch has started very late, such as IIT Gandhinagar (cse started in 2016). The second most important factor I will consider is the location of the institute, go to the IIT that is situated in a well-known city or where infrastructure is excellent. Because of the location now, IITH is almost comparable to old IITs.

If you are not getting IITH/IIITH, these are the best choice to join, they have an excellent alumni base, and placements are fantastic. Here your life will be less hectic as compared to IIITs/IITs.

After the first three NITs and IIITs, I will suggest going for DTU and NSIT. They have lovely placements. (DTU>NSIT).
IIITB/IIITD:
These two colleges have the best faculty in India, I have seen so far. Their placements are also excellent. But once you enter into IIITs, you will have to work hard, unlike NSIT/DTU/ or even TOP NITs.
So according to the analysis that I have done to write this post, I will suggest the following order, in which you should take admission if placements are the only concern for you:
Before writing this article, I have done a lot of research to make this list. This list is considering only the placements in that particular institute. If you think there is anything wrong with the listing, or you have some other query, comment down, we will try to answer that.
You May Also Like:
Share this...